Woohoo, thanks for the great response to the Sea Star on Friday!  I really appreciate everyone who offered to explore the tunic; I have another little pattern ready for us to test quite soon!

In the meantime, today is the day for quilt-chatter… Remember this from, like, three years ago?

After I finished the fussiest blocks for this block-of-the-month (those melons!), I laid it out and utterly loathed what I saw.  I couldn’t figure out why I disliked it, I’d seen many versions of this design as my quilty friends stitched it and liked most of them. But no matter how many times I looked at mine, I hated it.  That killed the project for me.  I put the blocks and fabric away in a drawer, shaking my head over the “waste” of time and fabric, not sure what to do with them.  Oh, the guilt! 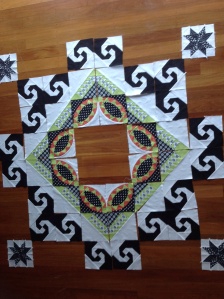 I found them when we moved, and decided it was time to make these blocks into a pretty quilt for my new bedroom.  I removed the big center block (I decided the orange wasn’t working for me…) and pondered what could fill that space.  I always liked Compass blocks and thought one might make a great feature.  I used the Surveyors Compass from here, sized up to a 12″ square.

When I play with quilt blocks, I like to know what to expect in the final design. It can be really difficult if you aren’t working from a pattern. So I like to take a photo with my camera, making sure it’s straight-on and the block is square.  Then I crop it and feed the photo into a collage app, rotating the pieces so they match up correctly.  (Instacollage works fine for me.) It’s not a 100% accurate method, but it’s a lot of fun!  It’s way easier and quicker than sketching or laying out every block. 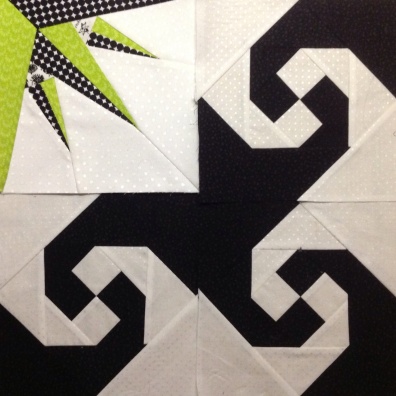 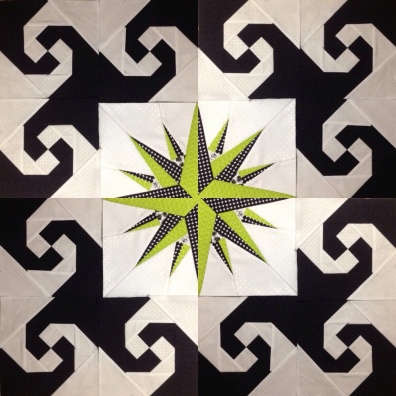 I decided to use the black and white and green blocks with the compass to make a new design, leaving aside all mention of that orange.

The Compass background fabric is the same as the other fabric, it just hasn’t been handled as much. They look the same except in photographs?

It’s amazing how rotating the blocks can give a completely different design, like a kaleidoscope. 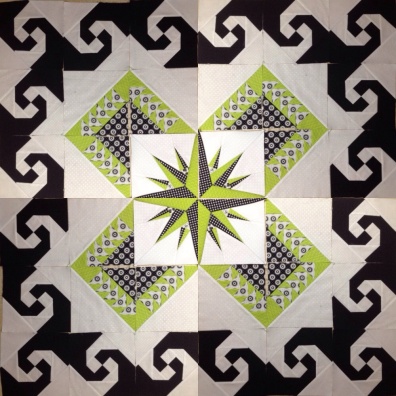 This was my favorite, but it still didn’t delight me as a good quilt should…

I added in some small scrappy starburst squares (whole ‘nother post!). I liked this better, but Stephen suggested that part of the appeal of Susan’s design was the strict color palette. Drat, I could see his point. 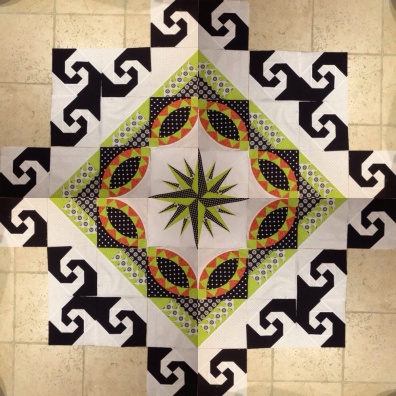 I kept casting glances at those fiddly melons, and tried using the intended layout with my compass.   I do like the shape they make framing the center block, it echoes the compass points beautifully. I stepped back and thought “Hey! A little touch of orange isn’t so bad!”  I’m considering stitching the full Compass block with just a bit of orange so the design pops better than it does with the “meh” black-on-white print that makes up the compass’ circle…

I’m pretty pumped about this project now! Sometimes it can be really hard to figure out what element of a project isn’t working, and what to use instead. I find that’s what usually turns a project into a UFO for me, that creative uncertainty. I’ll make up a few more blocks over the next month or so to fill in the corners and make up the size I need- probably more styles of compasses, or maybe some sort of black and white animals…

What’s your latest UFO? What halts a project for you? How’s my orange, think I should put it into the compass block or leave it alone?

This entry was posted in Quilting. Bookmark the permalink.