This afternoon I pulled out my much-loved and altered Vogue 8872 pattern from storage to refine the darts and seams. 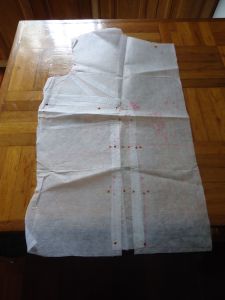 The fit is fine, but I always hated the super-chunky under bust dart and wanted to fix it. I feared separating the dart or moving it, because I knew I “didn’t know enough” to mess around with darts.  So I left it. 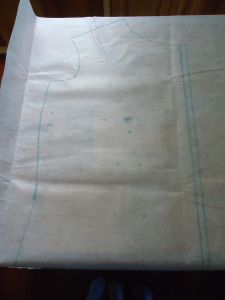 I made a quick tracing of the “original” pattern and marked my bust apex.  I held the pattern piece up to my body in the appropriate area and marked my nipple.  It’s helpful.

When you have a very curved area to cover, the more darts the better.  This shirt has several “control” areas- the underbust dart, the side dart, and a little bit of gathering around the neck.  The side dart looks fine, and I don’t want to add to the neck gathers.  Instead, I’m going to introduce a shoulder dart.  This is something I learned I like through sewing vintage patterns, and it’s only recently been pointed out to me that it’s a helpful dart for a busty lady (duh!).  I drew a line from roughly the middle of the shoulder seam, to the bust apex, down through the offending dart.  Then I cut that line. 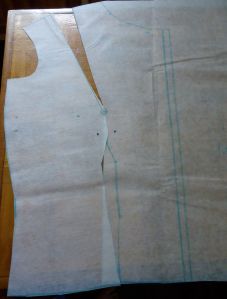 Using the bust apex as my “hinge,” I opened up a dart in the shoulder.  Notice the bottom of the dart- rather than being open as before, it is now pointed at the bottom.  Just like a “real” dart.  That was how I judged how far to pivot the pattern piece.

I laid another piece of polytrace on top of the pattern to make a “clean” copy.  Notice the dart is crooked.  Generally, that kind of dart should be parallel to the CF.  I marked a guideline from the tip of the dart straight down to the hem.

Then I remarked the dart, using the straight guideline to help.  I marked the dots in the same place vertically, just shifted it over.  There’s several ways to do this, I take the simplest route.

I pinned out the side dart. 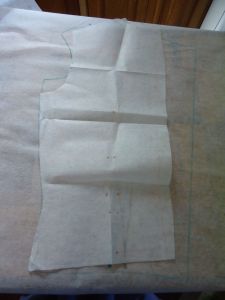 I laid the front onto the back to make sure the seams aligned.  I took this shot before I pinned out the dart, much head-scratching followed by head-smacking. 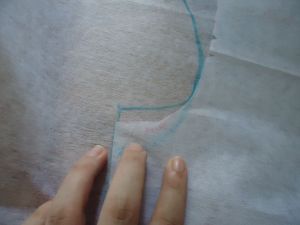 The front arm curve is slightly higher than the back.  I shaved off the front, smoothly blending it to the curve of the arm hole.  This is common with an FBA.  Double check that your sleeve will line up with your new arm curve.

I pinned out the shoulder dart and “pressed” it to the neck.  Then I cut along the shoulder line, so the shape of my dart would be correct.

Now I have a refined version of my favorite blouse- I can’t wait to try it out!  Notice none of my darts are terribly large.  Darts make flat fabric conform to a curved body- several gentle darts do this more easily than one or two chunky, abrupt darts.

Next time I do a “refining” post, I can show how to make a large FBA into princess seams.  In the meantime, do I hear any other pattern alteration requests?

I saw the Real Girl Belly Project over at xoJane and can’t resist sharing.  I love projects like this- slowly changing perceptions of women’s bodies and the media.  I figure the joke is on the fashion mags et al- we’re women AND we’re social media. Prepare for an eyeful.

I have most of the day to work on the Bladvass Dress tomorrow!  I made the pattern today.  The Sew Weekly challenge this week is to make a garment out of a piece of household fabric.  Does Bladvass count?  I bought the duvet cover specifically to make a dress.  If I sleep under it tonight, does that count?

This entry was posted in Full Bust, Pattern Alterations. Bookmark the permalink.