It’s still summer here, but not really.  The air changed, gradually, over the past few weeks.  The atmosphere no longer presses the city into the mud flats it sprang from, sweat doesn’t stick to the skin mixed with dust under a still, wet heat which seldom stirs.  Though the sun still shines brightly, it doesn’t bear down mercilessly from 8 in the morning until 6 in the evening.   At night soft, damp, cool air swirls through our opened windows.

Past summers in this climate meant burned, roughened skin, blocked pores, insomnia, depression and tension headaches for me, coupled with a general feeling of “This ain’t right” around hot Christmas.  I find it physically difficult to reconcile my body to this climate though I hail from the southern United States.

In previous years, my doctor prescribed a therapist for the depression and codeine for my headaches.  My head pounded from the moment I woke up until I could find a way to sleep, even if I took an aspirin.  The drugs created a vast distance between me and reality, and also blocked my digestion which was uncomfortable.  Last winter, I decided to try a new approach to summer.

I planned ahead how best to approach the endless summer though dress and grooming.  Here’s the list I wrote up last winter, and how it worked out for me:

Skin- I use an oats and yogurt mixture as a mask on my face nearly every morning.  I apply after breakfast, do some chores, then shower.  It’s effective; when I miss a few days my skin goes just as crazy as it has in past summers. 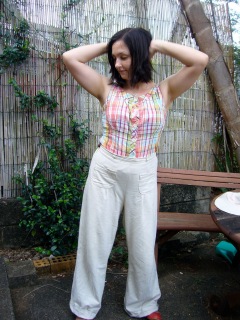 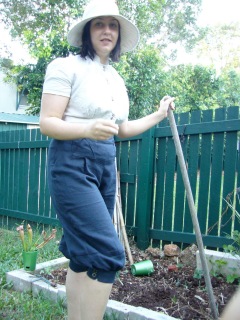 I finally made some Plus Fours in linen, paired here with “Sideways,” a linen blouse 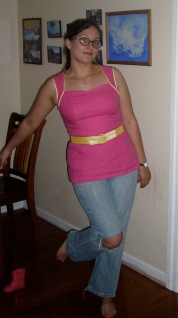 “Sex Candy” tunic of linen saw very little wear this summer, mostly because I gained some weight and had no summery pieces to match with it.

On the whole, I found a few “new” ways to dress for a long, hot, damp, bright summer.  I discovered the role whimsy can play in lifting my spirits a little, especially around Christmas: 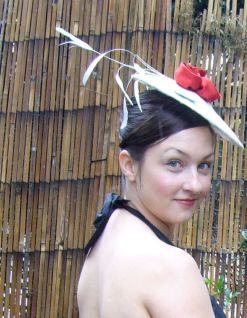 Dressed for Husband’s graduation, hat of silk and stripped coque

Christmas Cheer Hat, worn most of the month of December

Cleopatra and Caesar, we’re not fans of Antony
My Cleopatra dress from New Year’s Eve turned out to be the most perfect summer house dress I could imagine.  It’s flattering, I don’t have to wear anything else with it, and the cotton cheesecloth means it’s airy.  I might make more next summer.

Hats and shades and light unlined jackets changed my approach to summer.  My sun jacket saw almost continual use, as did my three rotating sun-hats.  Jean Ross pants were a great favorite, along with crisp little cotton blouses and easy-to-wear dresses.   In fact, I’m a little sad about washing them and packing them away for a few months.

This summer I had a few bouts of insomnia which responded to low dose melatonin tablets.  I had a little depression around the holidays which is to be expected.  My skin is clear, I have a normal appetite and don’t take drugs to get through every day.  On the whole, it’s been much easier to get by this summer than previous ones.  Perhaps it’s the sun blockage; perhaps it’s easier to cope because I’m finding my own ways to adapt.  I’m not sure, but I have an idea it’s a little of both.  It’s exciting to deal with my summer blues through behavior modification without turning to opiates.

This entry was posted in Depression, pure whimsy, Summer. Bookmark the permalink.