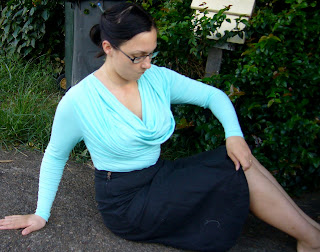 Complete!  I remember an apocryphal story of how the potato chip came to be:
In the summer of 1853, George Crum was employed as a chef at an elegant resort in Saratoga Springs, New York. One dinner guest found Crum’s French fries too thick for his liking and rejected the order. Crum decided to rile the guest by producing fries too thin and crisp to skewer with a fork. The plan backfired. The guest was ecstatic over the browned, paper-thin potatoes, and other diners began requesting Crum’s potato chips.
I remember versions of this story involving the diner sending the potatoes back repeatedly until Crum became rather sarcastic and purposefully over-did his diner’s request.
That’s how I feel about this top.  Don’t worry, I’m sick of it now, and won’t be geeking out over pattern making again for a little while..  My first three versions (I only showed you the best one!) were sickly weak cowls at best. 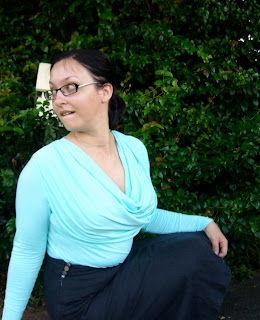 No one could call this a sickly weak cowl.  I might have taken it too far, especially given my physical proportions. 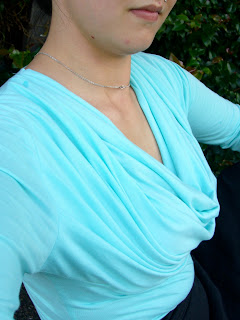 Well over two feet of drapes.   For the first time in longer than I can remember, I feel a little timid about wearing something I made in public.
That said, I rather like the ridiculous drapes because they remind me of classical sculpture. 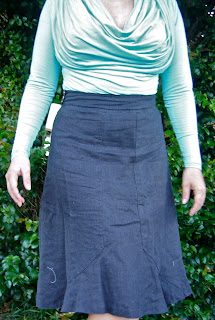 The aqua pleases me, I don’t have any clothes this color.  And of course, bamboo jersey feels like a delicious dream against your skin. 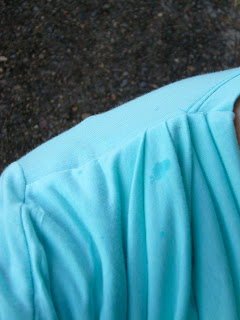 Shoulder pleat detail.  Not much to see here.  I did move the pleats closer to the neck which upset my marked pleats so I had to make new symmetrical pleats on the fly.  I’m not a fan of messing around with details like that as I sew, rather preferring to settle those types of issues before I even turn on my machine.  By the way, the pleating created much less bulk than I anticipated.
All photos by Lila.
Husband prepared a lovely post on yogurt-making without special equipment, stay tuned!

This entry was posted in bamboo, Drafting, Finished Objects, knits. Bookmark the permalink.